This episode of Hybrid Atlanta features Chad Radford, the music editor of Creative Loafing, Atlanta’s iconic alternative publication. In this first part of the interview, he talks about covering Atlanta’s music scene for 20 years and its evolution under the tension of being labeled as a “purely hip-hop town or a purely rock town.” Radford also discusses the problem of looking at the South through New York lenses.

In the second part of the interview, Chad Radford talks about Atlanta’s cultural diversity, the impact of Trump’s election on our perception of cultural inclusivity, and how to cover beyond “four white dudes playing indie rock.” He recaps some examples of the Hispanic presence in the local music scene (from Victor Mariachi to Yukons, Kibi James, and Upchuck).

Hybrid Atlanta is a video series of interviews with local artists and creatives whose work establishes a dialogue with LatinX and global cultures.

Created by Paul Alonso, it is produced by Polivision, a multimedia and bilingual outlet based in Atlanta. 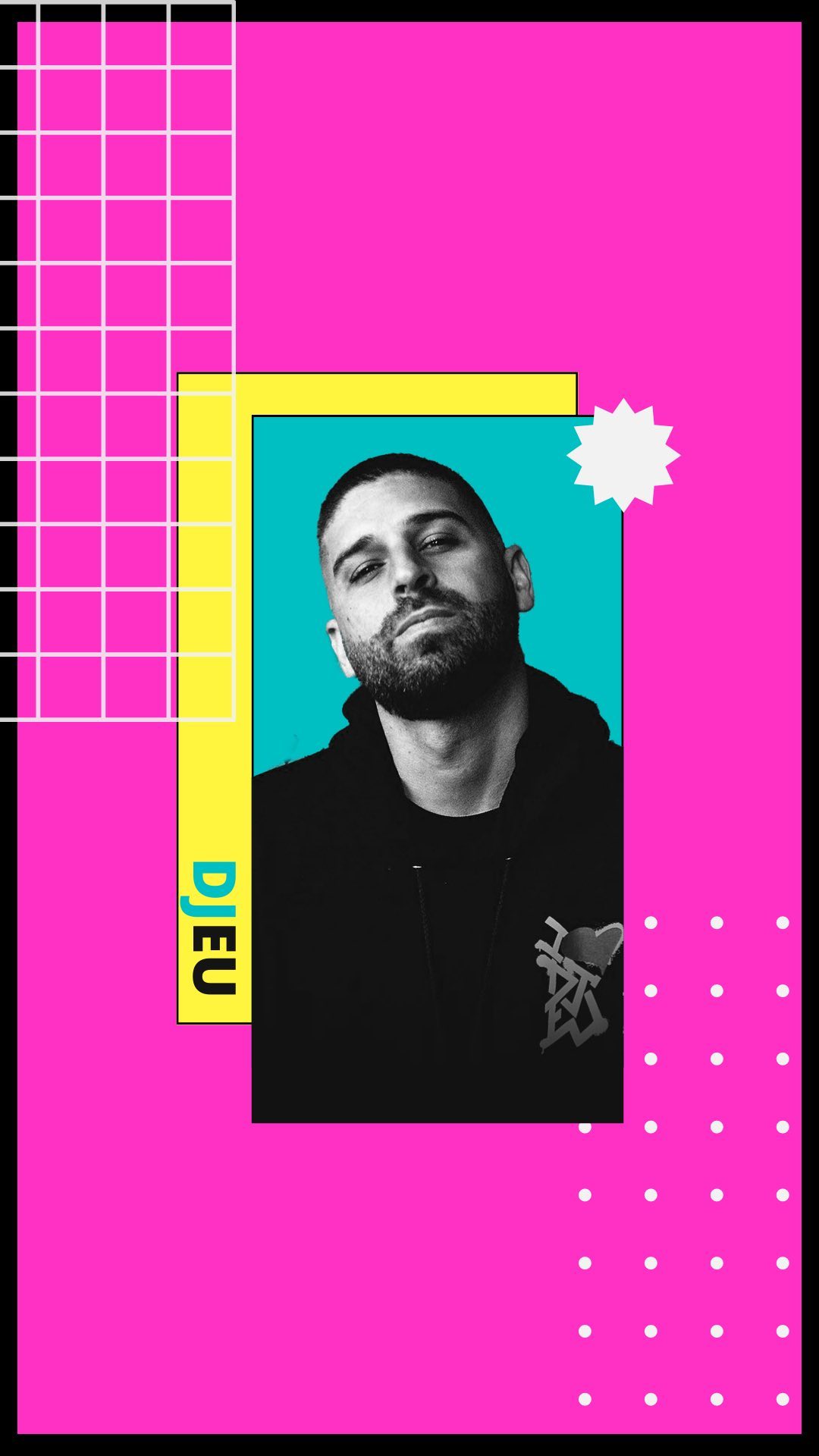 poli.vision
•
Follow
“Puerto Rico is my background, Atlanta is my sound” In this Throwback from Hybrid Atlanta, DJ EU @thedjeu expresses how important it is for a DJ to understand the diversity of Latin American music, and the different possibilities to energize people. You can check out our complete video interview on our Youtube Channel! #thedjeu #music #artist #latinamerica #dj #latinmusic
View on Instagram |
1/14 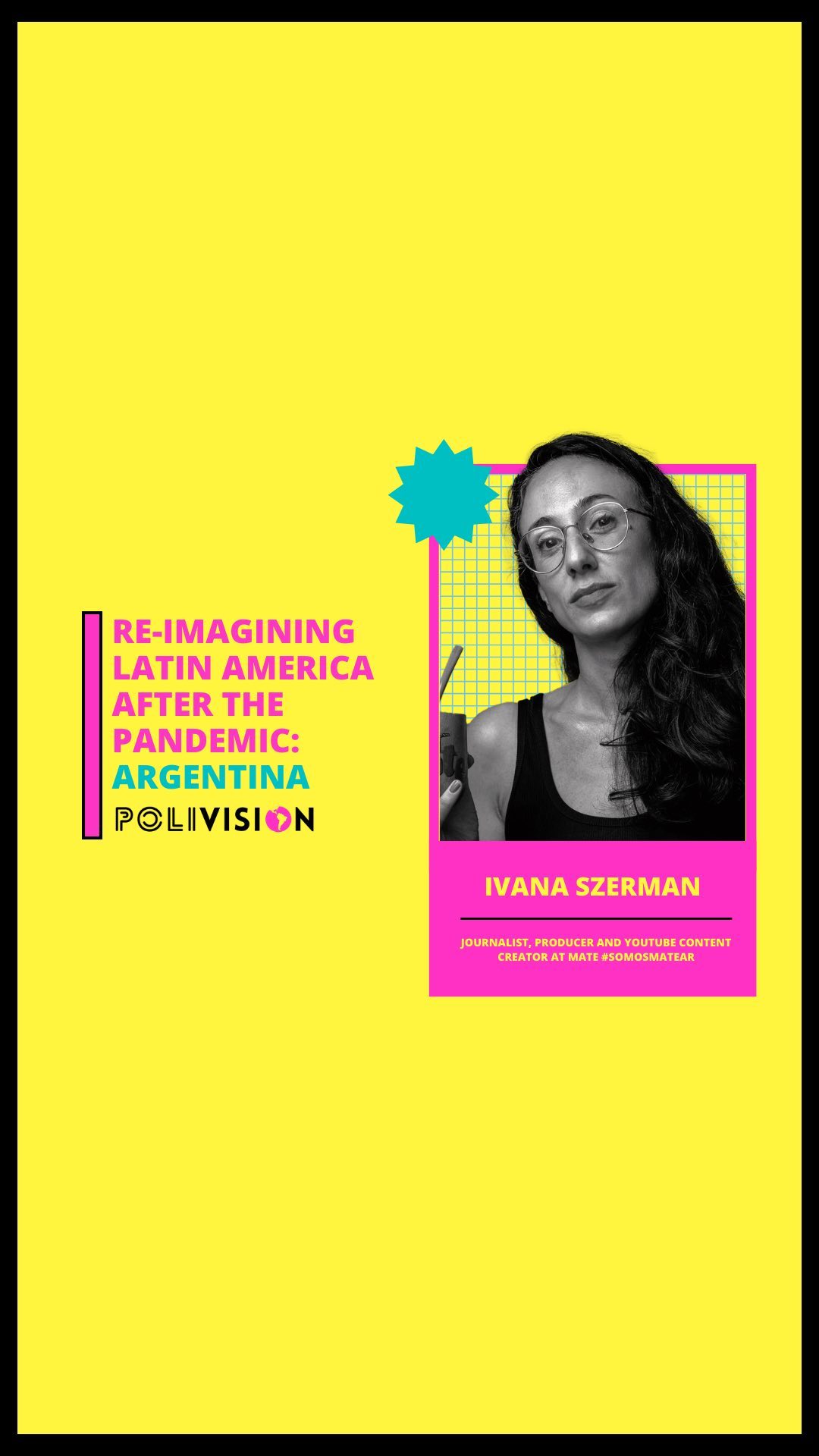 poli.vision
•
Follow
“Argentinian content creators also need an income” From denialism during the pandemic to the emerging content creator economy, Argentinian journalist and Youtuber Ivana Szerman @ivanaszerman describes the social and digital landscape Argentina is experiencing after the pandemic. This video column is part of our series on Reimagining Latin America After the Pandemic: Media, Culture and Democracy For the full video column, check out our YouTube channel (Link in bio) and our website. Do you have any ideas about the topic discussed in Ivana’s video column? Let us know in the comments below!
View on Instagram |
3/14 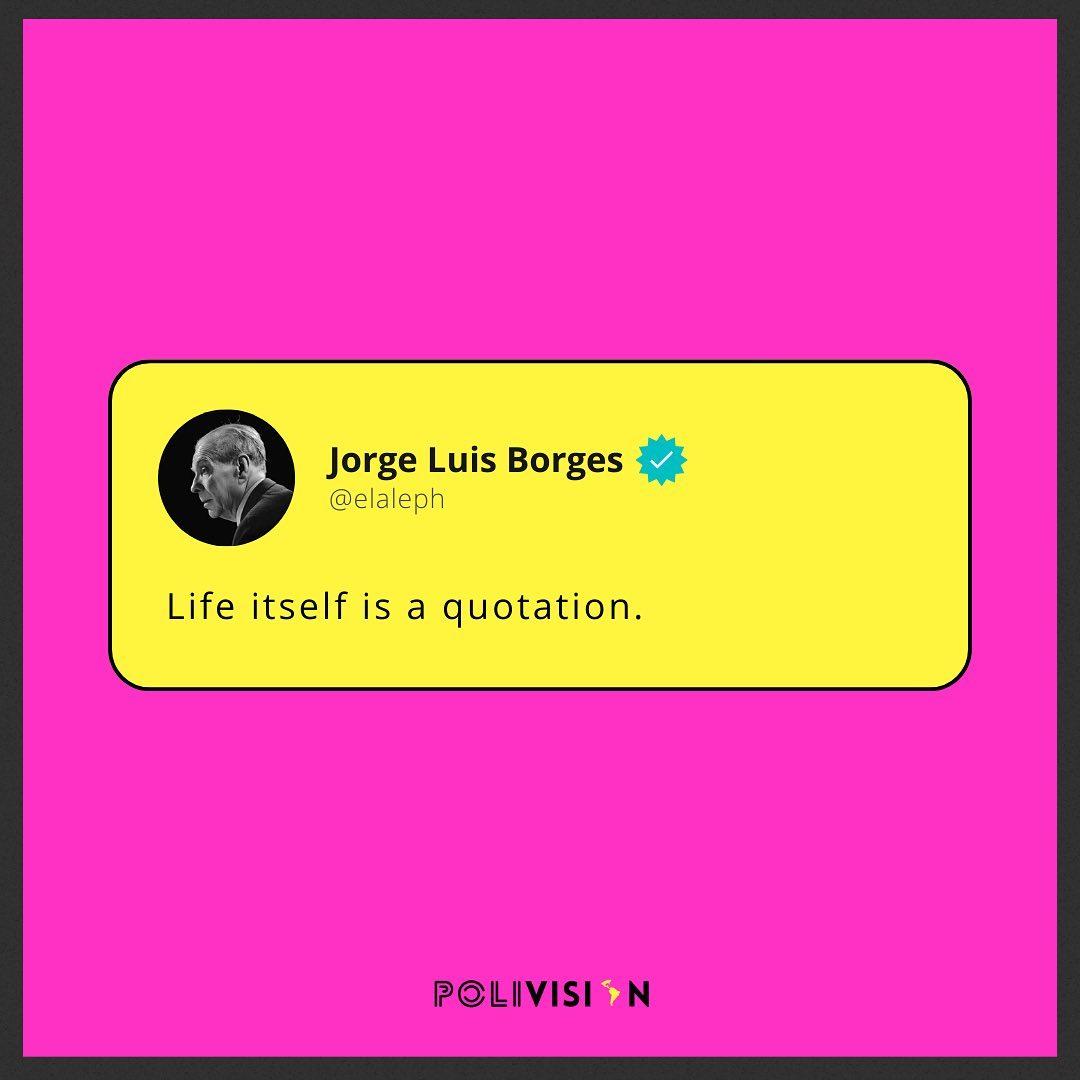 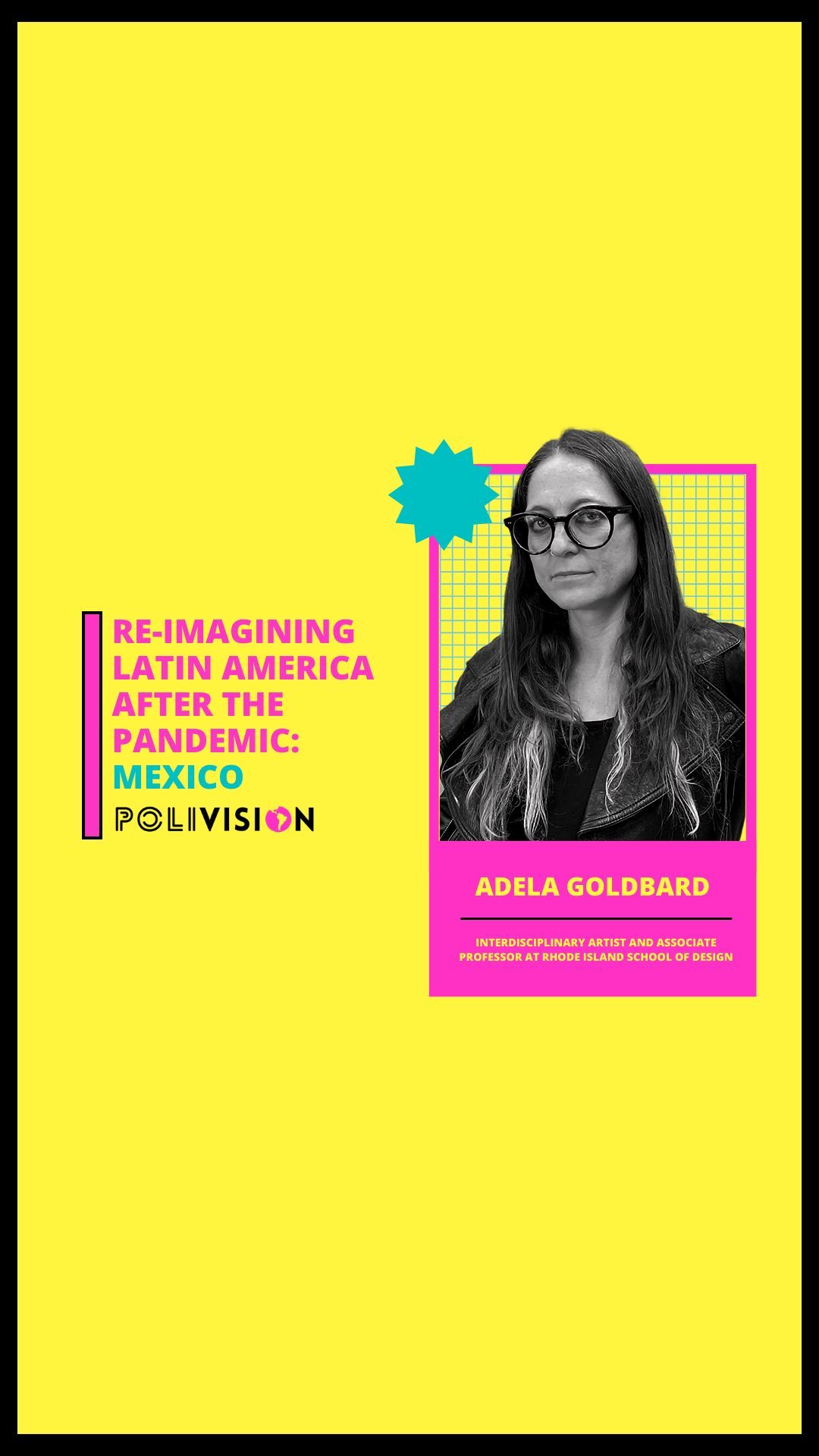 poli.vision
•
Follow
How did the pandemic impact Mexico’s democracy and culture? From the militarization of the citizens to socially committed art, Mexican artist and professor Adela Goldbard @aca_gold helps us understand Mexico’s situation and challenges after the pandemic. This video column is part of our series on Reimagining Latin America After the Pandemic. For the full video column, check out our YouTube channel (Link in bio) and our website. Do you have any ideas about the topic discussed in Adela’s video column? Let us know in the comments below! #Mexico #Mexicandemocracy #Latinamerica #Arts #Pandemic #adelagoldbard
View on Instagram |
5/14

poli.vision
•
Follow
"Re-imagining Latin America After the Pandemic: Media, Culture and Democracy" What did we learn from the pandemic? What are our options to reinvent broken or damaged sociopolitical, cultural and media systems? This series of video columns by journalists, artists, and scholars from the Americas offers insights about the present and the future of the region looking at the recent (and not so recent) past. These are some of our published and forthcoming videocolumns: Sebastián Valenzuela (Chile) - How did the pandemic impact Chile’s democracy and media? María Paulina Baena (Colombia) - Have Colombians become better after the pandemic? Adela Goldbard (Mexico) - The closure of independent art spaces affected emerging artists in Mexico. Ivan Szerman (Argentina) - Argentinian content creators also need an income. This series of videocolumns continues a transnational special that we had on Peru, with the participation of the journalist Marco Sifuentes, the historian Carmen McEvoy, the filmmaker Gonzalo Benavente, the political scientist Alberto Vergara, and the correspondent Jacqueline Fowks. For the full video columns, check out our YouTube channel (Link in bio), our website, and our other social media platforms. @paulalonso1 @mpaulinabaena @ivanaszerman @somosmatear @lapullaopinion @elespectador @fcomuc @aca_gold #latinamerica #democracy #culture #chile #mexico #argetina #peru #colombia #pandemic #media #art #journalism #digitalmedia
View on Instagram |
6/14 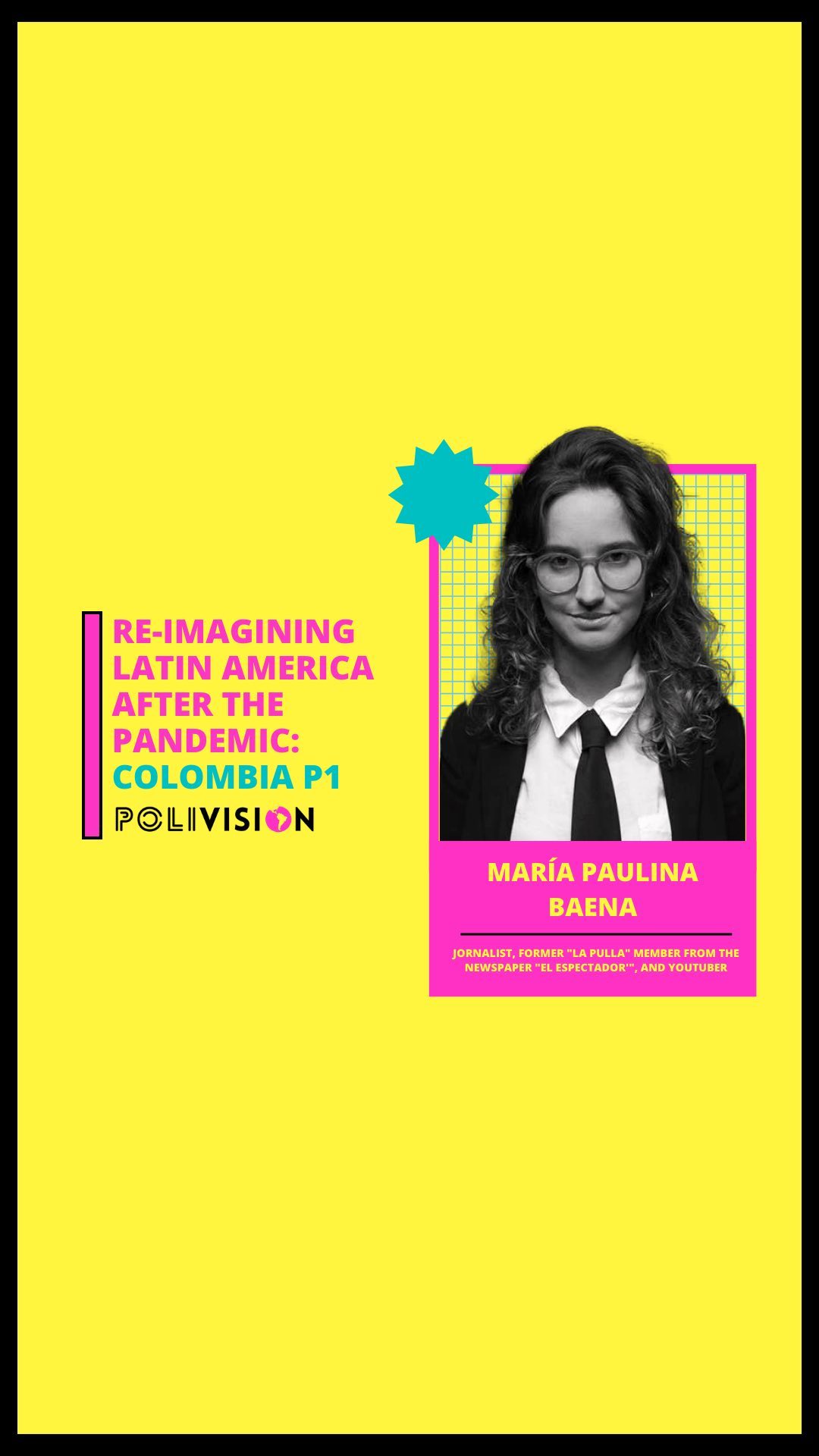 poli.vision
•
Follow
“Have we become better people after the pandemic?” From the increasing economic disparities in Colombia, to the need of a new solidarity as means of becoming better people after the pandemic, Colombian Journalist and Youtuber María Paulina Baena (@mpaulinabaena from @lapullaopinion) exposes the socioeconomic reality that her country and Latin America face after the Covid-19 pandemic. This video column is part of Polivision’s series on Reimagining Latin America After the Pandemic. For the full video column, check out our YouTube channel (Link in bio) and our website. Do you have any ideas about the topics discussed in María Paulina’s video column? Let us know in the comments below! #colombian #mariapaulinabaena #colombia #pandemic #lapulla #elespectador #journalism #democracy
View on Instagram |
7/14 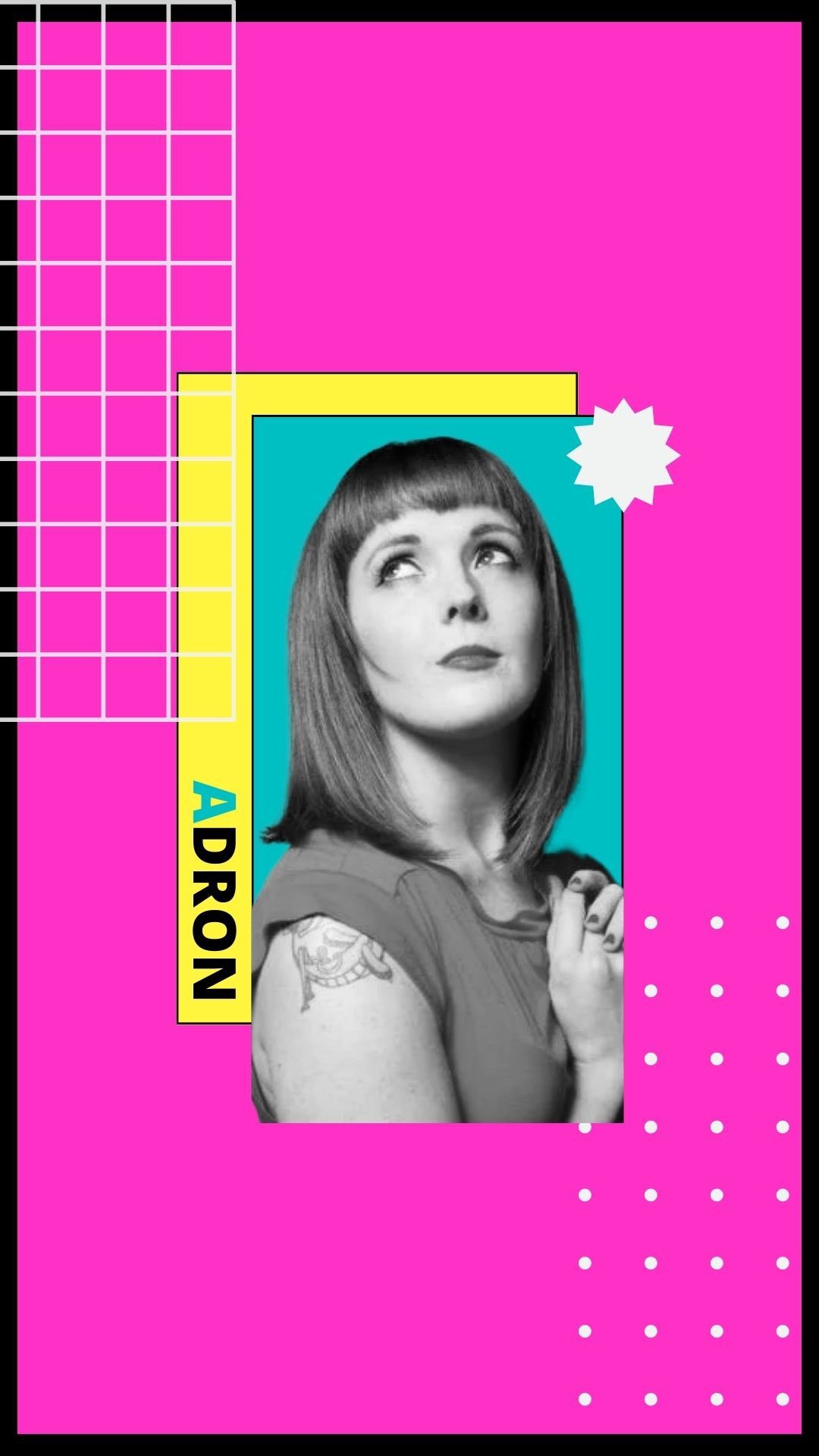 poli.vision
•
Follow
“I have to be able to sing along (in Spanish)” Introducing #tbt with @adronical: songwriter and performer formerly based in Atlanta. In this Throwback from Hybrid Atlanta, Adron expresses the relevance of the Spanish language and the culture surrounding it. From how Latin culture impacts her work to her experience with her album Water Music, you can check out our short video interview in our Youtube Channel! Do you also love music in foreign languages? Let us know in the comments below! #Adron #music #artist #latinamerica #singer #songwriter #latinmusic
View on Instagram |
8/14 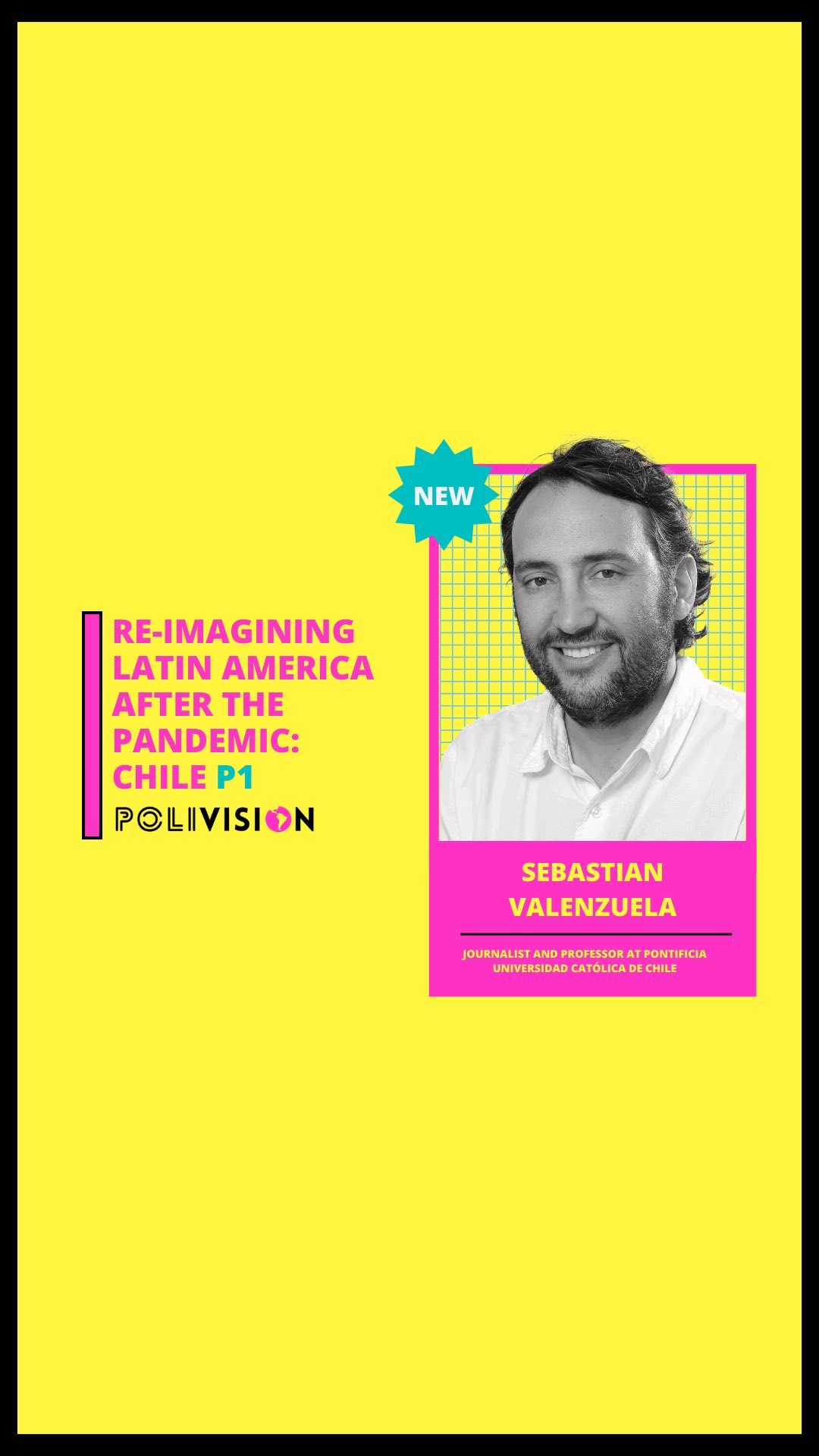 poli.vision
•
Follow
“Chile has a national OBSESSION of being a role model” From the illusion of Chile being a role model to the new forms of media emerging in the country, Chilean journalist and professor Sebastián Valenzuela describes the political landscape Chile is experiencing after the pandemic. This video column is part of Polivision’s series on Reimagining Latin America After the Pandemic. For the full video column, check out our YouTube channel and our website (Link in bio) Do you have any ideas about the topics discussed in Sebastián’s video column? Let us know in the comments below! #chilean #sebastianvalenzuela #Chile #pandemic #politicalscience #journalism #democracy
View on Instagram |
9/14

poli.vision
•
Follow
“Do you ever suddenly find it strange to be yourself?” This quote is found in the book A Breath of Life by the Brazilian writer Clarice Lispector. Clarice is regarded as one of the most mysterious authors of the 20th century and one of the best female authors in Brazilian history. Her idiosyncratic work covers topics such as introspection and childhood in unique ways worth reading! Have you ever read Clarice’s work? Let us know in the comments! #brazil #writter #novelist #brazilianwritter #claricelispector #literature
View on Instagram |
10/14 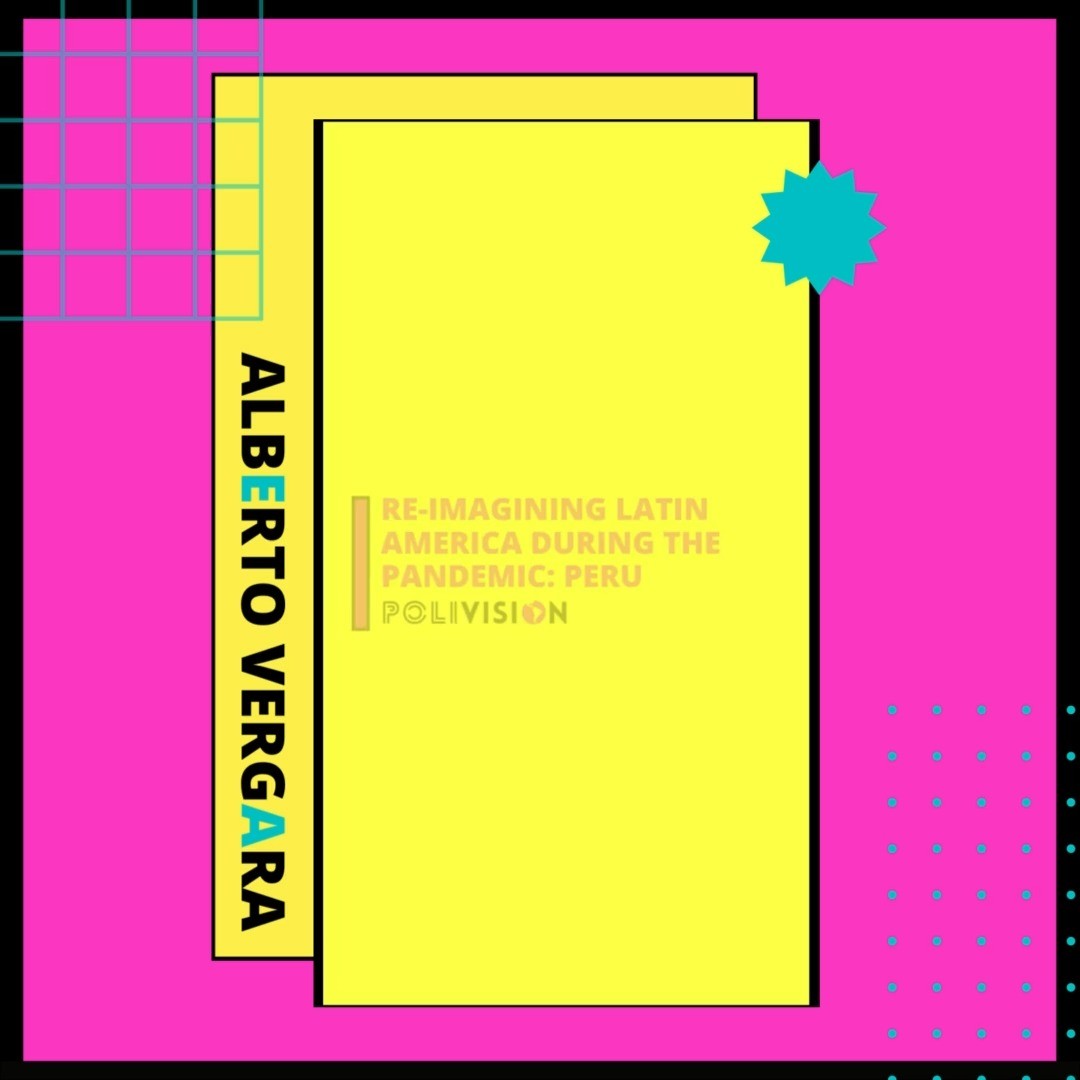 poli.vision
•
Follow
"Chaos awaits in Peru’s future” Happy Thanksgiving!! and #tbt with Alberto Vergara: Political scientist and professor at Universidad del Pacifico, Peru From our Polivision series on Reimagining Latin America During the Pandemic, Alberto Vergara talks about his vision of the future of Peru based on the State, economy, politics, and society. In this video you will find: An analysis of the Pandemic as a reviling medium about Peru’s reality How different components of the Peruvian reality shaped its response to the pandemic The possibility of an authoritarian government soon. For the full story, check out our YouTube channel and our website (Link in bio) Do you think Chaos is awaiting in Latin America’s future? Let us know in the comments below! #peruvian #albertovergara #Peru #pandemic #politicalscience #authoritarism #democracy
View on Instagram |
11/14 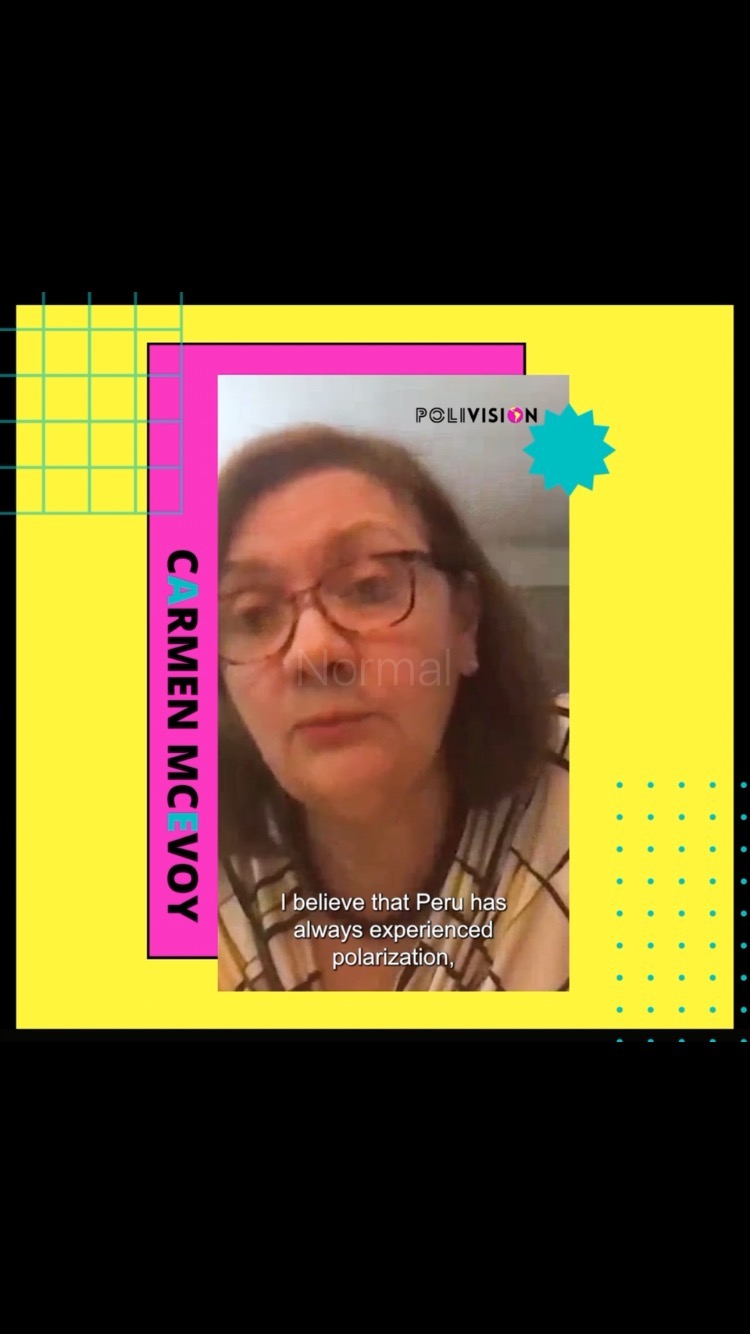 poli.vision
•
Follow
“Peru has an installed War Culture” #tbt with Carmen Mc Evoy @mcevoyperu : Award-winning historian, professor, and columnist. From our Polivision series on Reimagining Latin America During the Pandemic, Carmen Mc Evoy talks about her insights about the reality Peru faces today because of its problematic war culture history. In this video you will find: Why we should go back to collaborative communities What history can teach us about the political landscape of Peru Why should we focus in happiness rather than power For the full story, check out our YouTube channel and our website (Link in bio) Do you think the historic past of your country prevails to this day? Let us know in the comments below! #peruvianhistorian #carmenmcevoy #Peru #pandemic #warculture
View on Instagram |
12/14 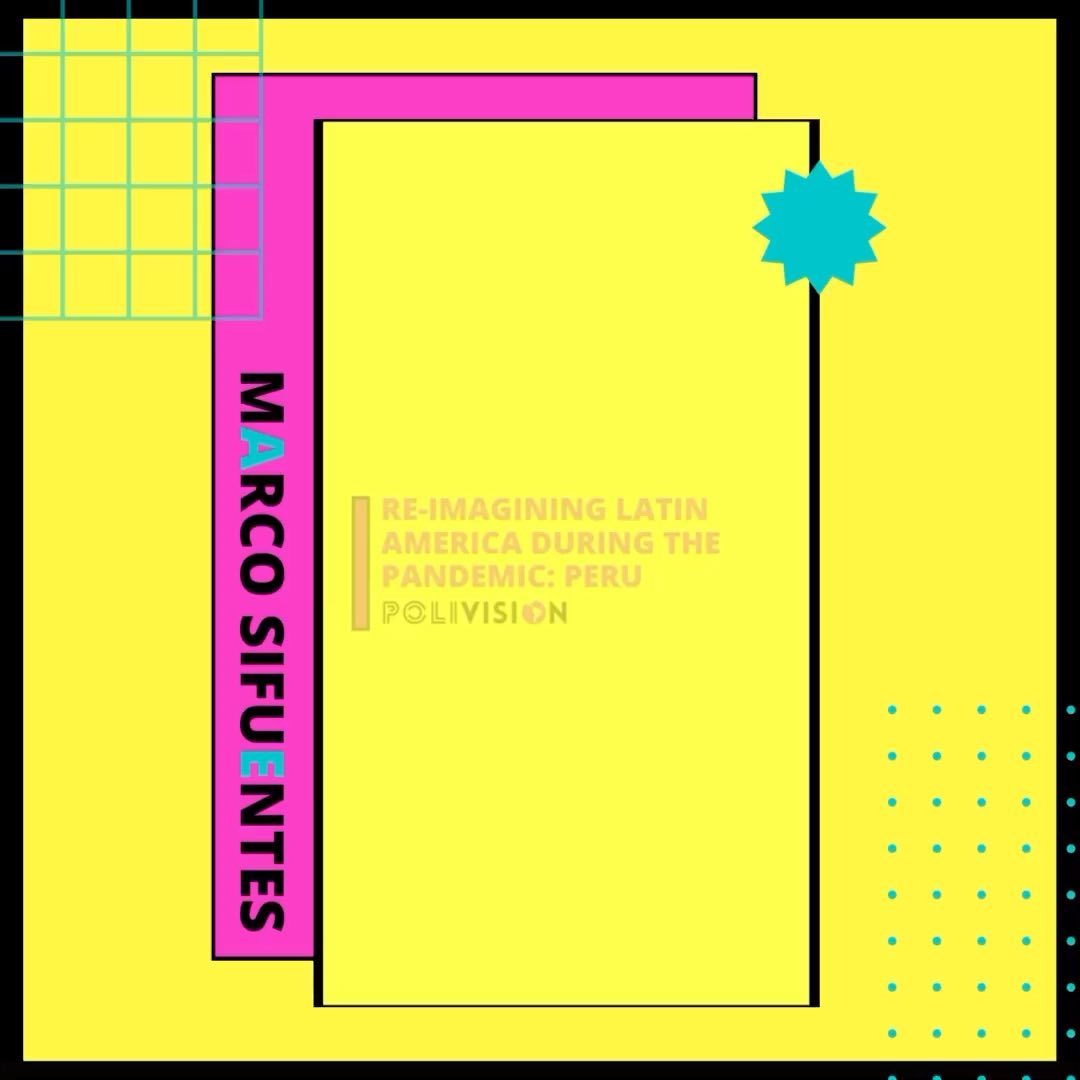 poli.vision
•
Follow
“Journalists should be a FILTER” #tbt with Marco Sifuentes @instaocram: Peruvian journalist with 20 years of experience and founder of the podcast “La Encerrona” @la.encerrona From our Polivision series on Reimagining Latin America During the Pandemic, Marco Sifuentes talks about his experience as a journalist covering Peru and the changes journalism has suffered during and after the pandemic. In this video you will find: Misinformation spread by the traditional media The Role of journalists in the digital era His experience founding La Encerrona, and more! For the full story, check out our YouTube channel and our website (Link in bio) Do you also believe journalists should be filters of reality? Let us know in the comments below! #latinos #journalism #journalist #latinamerica #peruvianjournalist #laencerrona #Peru
View on Instagram |
13/14 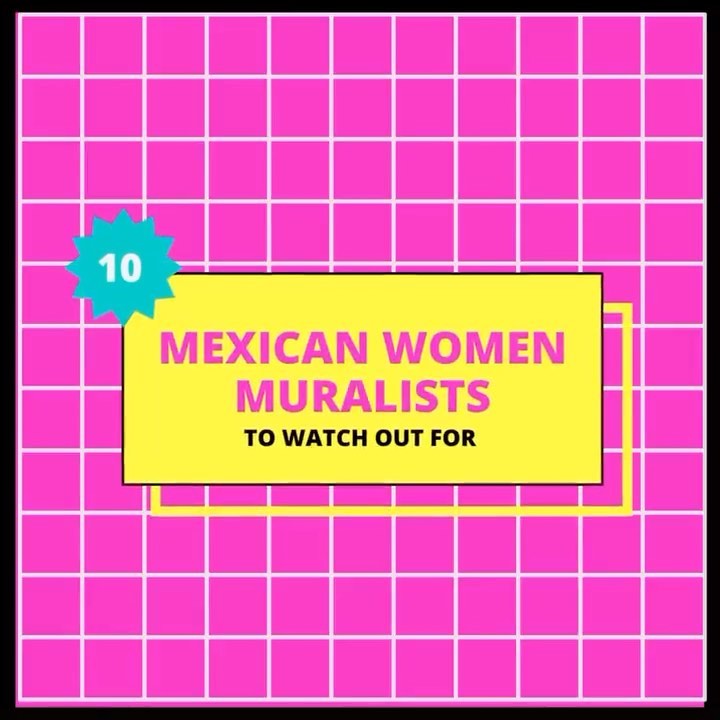 poli.vision
•
Follow
Do you know that women artists are reshaping Mexico’s muralist tradition? Here are 10 of them. Founded by Scarlett Baily, @mujeresmuralistas aims to increase the visibility of work by women muralists by creating awareness in curators of exhibitions, organizers of art festivals, and the general public of the importance of artwork by women. This project grew out of Scarlett’s realization that women were being looked over in favor of their male counterparts at festivals, exhibitions, and public projects. In August 2019, Scarlett put out a ‘call to draw’ asking Mexican, Chicana, and foreign artists with murals in Mexico, to sit for her. Many women responded to the call, and Scarlett, took the idea from here to a more ambitious projection.
View on Instagram |
14/14
View on Instagram